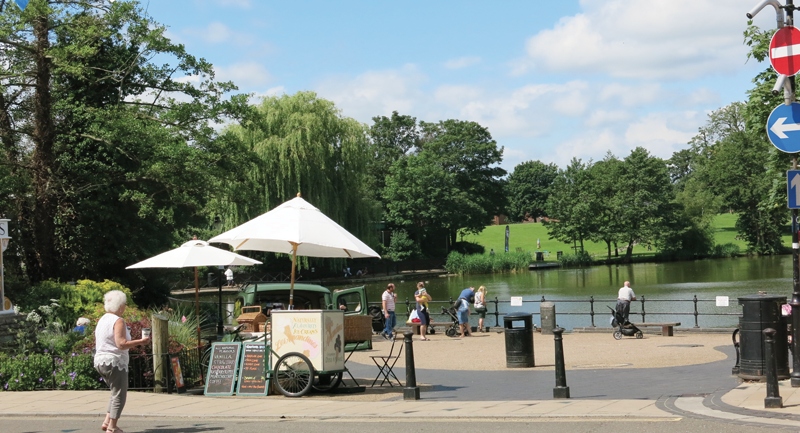 “You’ll like Diss. There’s a beautiful mere.” The first time that I walked across Diss Park, and saw water, like a blue blossom opening in the greenery I knew that my friend’s prediction had proved positive. In fact the presence of a natural lake that lies within a few steps of Costa, Barclays, and a Friday market, is a conservation area enjoyed by many. The Mere is not only a beautiful natural phenomenon but also the subject of scientific study. As yet, though, nobody seems to know for sure how it originated.

Diss is referred to in the Domesday Book as Disce, which is the Saxon word for a pool of standing water. Dis is the name of a Roman god of the Underworld and correspondingly folklore implies that The Mere is bottomless. Even less evident are the red, flaming tower, iron walls, and three women entwined with green snakes, though they really do feature in Dante’s description of the City of Dis!

Naturally, statistics vary but information published on the Diss Town Council website indicates that the area of The Mere equals five and a half acres, and it is twenty feet deep. However, below water there is approximately six metres of mud. The chalk basin that contains the blend is thought to have been carved out of the earth’s crust by a glacier. No-one remembers that of course, but there is documentary evidence on the internet showing that festivities were enjoyed on the Mere when it froze in 1827 and 1891. The Norfolk Chronicle reported, ‘Rustic sports’ were enjoyed on the first occasion, and on the second there seems to have been a celebration during which people wore fancy dress. Flares placed in a circle of barrels lit the event and Chinese lanterns were used for decoration. The magical effect was complete when snow began to fall.