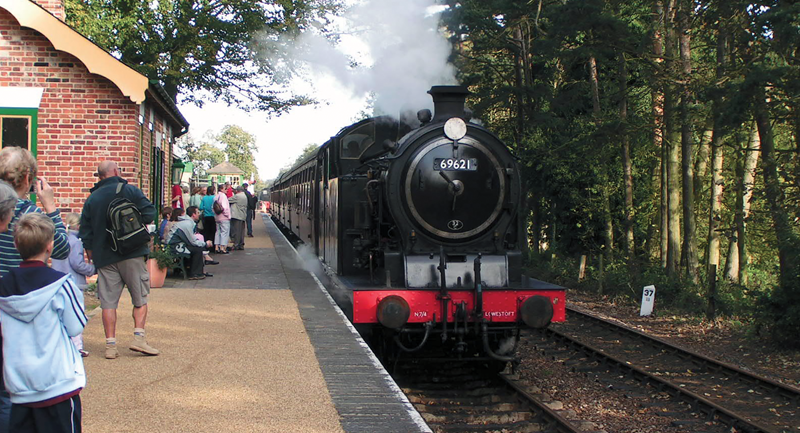 The preserved railways of East Anglia, by Jan McGeachie

Think of steam or preserved railways in East Anglia and the importance of the position of the village of Melton Constable as a vital transport link immediately becomes apparent.

The station on the Midland and Great Northern Railway site may have closed over fifty years ago in 1964 but its location played an important railway connection to all the major towns in both Norfolk and Suffolk, a fact that remains today, as its role may possibly be restored as part of Norfolk’s Orbital Railway, hoping to serve as Norfolk’s community railway both to its residents as well as its visitors.

This new circular Norfolk Orbital route will connect Sheringham and Wymondham with the national rail network by joining two preserved railways together, namely the Mid Norfolk and North Norfolk Railway.  At Wymondham linking the Breckland Line between Cambridge and Norwich to Wymondham Abbey on Mid Norfolk Railway to County School from there on through Ryburgh, Fakenham, Thursford, Melton Constable to Holt where it joins the North Norfolk Railway to Sheringham then along the coast to Cromer beach, which was first opened back in 1887.

Naturally changes have been made over time; now that the line between Cambridge and Ely is electrified, the only semaphore signalling and manually operated level crossing gates to be found in Norfolk are now only on these preserved railways.

Strange how the thinking behind railways played an important part in the counties’ development: the routes that were laid then in the mid 1800s continue even today in the 21st Century, the only difference being where once there were close to a hundred stations, these have now dwindled to around thirty.

It was initially thanks to the landowners that the railways between these large towns were established to create a vital link between the farming community and the markets they served. The Lynn and Fakenham Railway started in 1882, linking Kings Lynn with Norwich. The connection to North Walsham was completed the following year which ended at Great Yarmouth to form the Eastern and Midlands Railway, later the Midland and Great Northern Joint Railway (M&GN). At its hub the four railway lines at Melton Constable linked Holt with Cromer Beach, North Walsham, Kings Lynn and Norwich.

Melton Constable became so important a railway engineering junction that houses and a school to educate the children had to be built to accommodate its growing population. Goods trains were shunted and assembled here so not only were they building but also repairing locomotives in the factories and workshops, with anything up to a dozen engines being housed in the Engine shed at any one time.