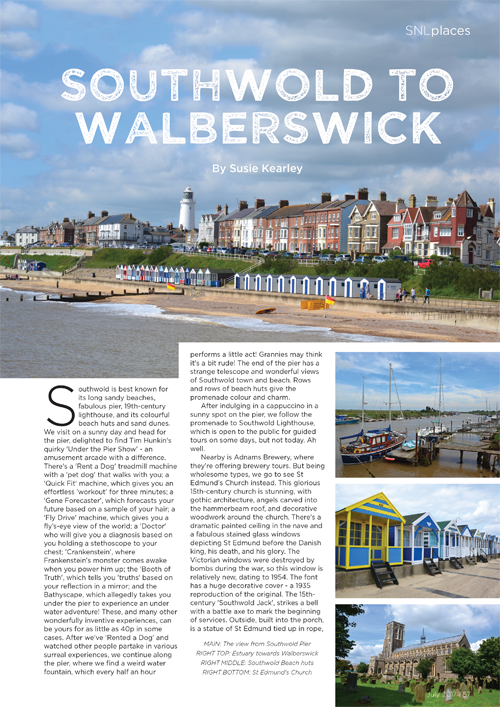 Southwold is best known for its long sandy beaches, fabulous pier, 19th-century lighthouse, and its colourful beach huts and sand dunes. We visit on a sunny day and head for the pier, delighted to find Tim Hunkin’s quirky ‘Under the Pier Show’ – an amusement arcade with a difference. There’s a ‘Rent a Dog’ treadmill machine with a ‘pet dog’ that walks with you; a ‘Quick Fit’ machine, which gives you an effortless ‘workout’ for three minutes; a ‘Gene Forecaster’, which forecasts your future based on a sample of your hair; a ‘Fly Drive’ machine, which gives you a fly’s-eye view of the world; a ‘Doctor’ who will give you a diagnosis based on you holding a stethoscope to your chest; ‘Crankenstein’, where Frankenstein’s monster comes awake when you power him up; the ‘Booth of Truth’, which tells you ‘truths’ based on your reflection in a mirror; and the Bathyscape, which allegedly takes you under the pier to experience an under water adventure! These, and many other wonderfully inventive experiences, can be yours for as little as 40p in some cases. After we’ve ‘Rented a Dog’ and watched other people partake in various surreal experiences, we continue along the pier, where we find a weird water fountain, which every half an hour performs a little act! Grannies may think it’s a bit rude! The end of the pier has a strange telescope and wonderful views of Southwold town and beach. Rows and rows of beach huts give the promenade colour and charm.

After indulging in a cappuccino in a sunny spot on the pier, we follow the promenade to Southwold Lighthouse, which is open to the public for guided tours on some days, but not today. Ah well. Nearby is Adnams Brewery, where they’re offering brewery tours. But being wholesome types, we go to see St Edmund’s Church instead. This glorious 15th-century church is stunning, with gothic architecture, angels carved into the hammerbeam roof, and decorative woodwork around the church. There’s a dramatic painted ceiling in the nave and a fabulous stained glass windows depicting St Edmund before the Danish king, his death, and his glory. The Victorian windows were destroyed by bombs during the war, so this window is relatively new, dating to 1954. The font has a huge decorative cover – a 1935 reproduction of the original.