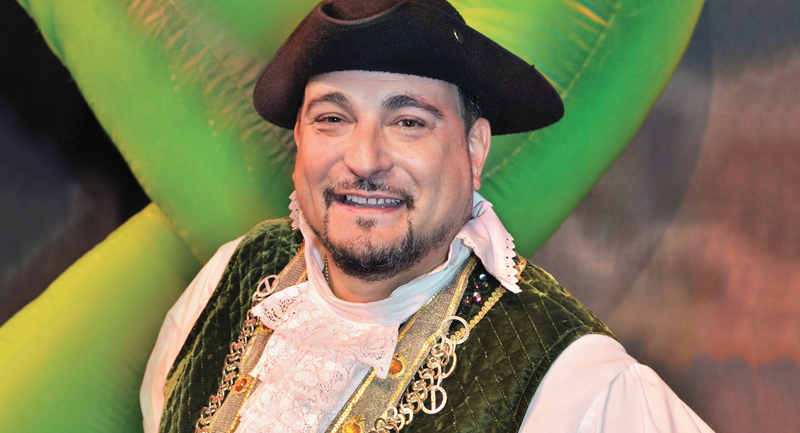 Wayne Bavin is BBC Radio Suffolk’s newest presenter to join team Suffolk. He’s also appearing again this year at the Ipswich Regent in Panto for his third consecutive year. But first I wanted to find out more about the new love of his life, often mentioned on his show – Molly.

“She’s a white West Highland Terrier who was a rescue dog from the Blue Cross. I’d always wanted a dog and now the kids are older and I have more time, it was an ideal time to get her. She’s lovely and we take her to Felixstowe on a Sunday to walk along the prom – it’s doggie paradise there! Before I owned a dog people would say to me, ‘Look my dog’s smiling,’ and I’d be like, “Shut up! dogs don’t smile” – but they do! Molly does, she’s so cute.”

Wayne’s passion for radio has seen him work for over 15 different radio stations up and down the country and in the New Year he plans to bring out his first ever book entitled Radio Gypsy about his broadcasting experiences.

“I’ve liked radio from the age of 10. My friends had sports stars and pop star posters on their bedroom walls and I had radio station car stickers and presenter pictures on mine. I remember I got lots of funny looks from my careers adviser and my parents as well when I said I wanted to be a radio presenter.” His father and uncle both worked at British Steel and so they arranged for Wayne to go for an interview for an apprentice role. “I fluffed it up on purpose so that I didn’t get the job.” His first ever taste of a radio studio was at just 15 volunteering for hospital radio in his hometown of Cleveland. “While working there I was working alongside someone who worked on BBC Radio Cleveland, so I went there and I got a volunteer position on a Saturday helping on the sports show. In those days you used to edit on an old fashioned tape machine with a razor blade, and you couldn’t undo edit when you got it wrong!”

Leaving school Wayne applied for and was accepted onto a Youth Training Scheme. “In Hartlepool there was an organisation called FACE which stood for Facility Access for Creative Enterprise. They took on a girl who wanted to be a model called Chloe, a snooker player [Mike Dunn] and me. I spent one day at the BBC, one day working in hospital radio and two days with them.” The snooker player – Mike Dunn – is now a professional snooker player ranked within the top 60 in the Country, and Chloe went on to become a full-time model. “It allowed you to do what you wanted to do. I never wanted to go to Uni and get a broadcast degree. I didn’t see that as my way into radio. I wanted to do it my way.” After completing his YTS scheme Wayne I got a job working at KIXX FM. “I was 17 and worked with them for a month doing the breakfast show. I got my first proper gig at KL FM from there.” KL FM was based in Kings Lynn and they took Wayne on as a full-time programme assistant.